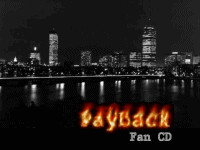 Payback is one of the most popular amiga games of the last years and can still fascinate a loyal fan community. Because of that we have created a CD for Payback fans.
The Payback Fan CD is an AddOn CD for the Amiga game Payback. On the CD you can find 12 background pictures and 16 Patterns for the Workbench as well as skins for AmigaAmp. The highlight of the CD are the 22 still unpublished Maps, which guarantee you many hours of fun. If you like to create your own levels, you can find many textures of all types on the CD. Additionally you can find a exclusive interview of James Daniel, all "Amiga Speed" tests, the Amig@lien Payback Website and many reports about Payback. As a Payback Fan you absolutely need this CD.

The Payback Fan CD is delivered on CD and costs just 5,95 Euro. Order at once in our

The Payback Fan CD is an AddOn CD for the Amiga game Payback.

The followed material find you only on the Payback Fan CD:

You need the following to be able to run the Payback Fan CD:


At the moment there are no press-statements concerning "Payback Fan CD" available.